Posted by Dedra Wolff at 5:59 AM No comments:

I think it is well past time that Ancestry.com (and other historical archives, academic libraries, and commercial genealogy sites) address their indexing biases. Whether indexing was directly done by humans or by human-written code, I find it ridiculous that all the people mentioned in a will or other documents are not indexed in what is soon to be 2023.

I am looking at a will right now where an enslaved woman, Lucy, is bequeathed to others in the all too common practice of the time and region. Lucy was a person. Lucy was denied her agency then; she shouldn’t be denied her identity now. It will take time to get this right. Doesn't mean we cannot start.

There is a current feature where I, as the user, can amend the record called ‘Add New Person to Index’. However, it only allows me to save if I provide a last name. Giving her the last name of her enslavers feels wrong and unjust. Lucy will be stuck forever with that name in the digital records world. Also, my options for the relation of the will’s author to Lucy don’t cover this situation. ‘Servant’ and ‘Other’ being only non-familial options. Lucy wasn’t a servant; she was an enslaved person. Other is perhaps painfully ironic but not right. Yes, slavery is shameful but masking it now by erasure and obfuscation is not the right path.

Posted by Dedra Wolff at 6:14 AM No comments:

Genetic Ancestry when it is not for Cousin Catching

Besides the obvious help of finding relatives that DNA offers, DNA testing has helped me in other ways. First of all, I don't too worked up about all of this. I don't go buying heritage swag in the form of "Kiss me, I'm Irish" buttons or "Honk if you're Italian" bumper stickers for my car. I never have been emotionally invested. The science and commercialization of parts of that science do intrigue me though. These "ethnicity" estimates are based on people answering questions either in a commercial setting (example FTDNA Where are your people from? Type that here) and regional research projects that perhaps would ask research subjects different questions or at least ask the questions differently today. In aggregate, there is going to be so mush and squish in there. However, I also don't discount the ethnicity/regional estimates entirely and say "That cannot possibly be correct as I know yada yada yada..." Maybe there is a tidbit in there that doesn't bear out now but may provide a glimmer of a clue later. The lack of something might also be equally as telling. Finally, when/how long ago of an ethnic/regional characteristic really puts a different spin on the same exact DNA. Being from a place now would be very different from then, whenever *then* is. So instead of being wrong or inconsistent with another testing company's results, you might be comparing apples and elephants.  Others have and will do those comparisons much better than I ever could. Instead, I wanted to dive into some times where DNA has helped in more than cousin catching.

"Our family is related to the people of Cherokee Nation (CN) [Tsalagi, a North American Indigenous People]"

After more than 12 years of research, no primary source/paper record ever revealed any connection to any North American Indigenous People, much less to the CN. A DNA test finally cinched the no connection piece for me because these populations are fairly well-studied. As older relatives also took DNA tests, I felt we finally had to put that family myth to bed. I proposed to my cousin who also dabbled in family history, that the myth perhaps got started because a group had lived in Cherokee county and then returned there years later. Only found this when I traced a wayward son through his life. He ended living with people other than his biological family but always seemed to try and go back to Cherokee county. From "from over in Cherokee"  seems easily munged to "from Cherokee" to me. I do not know if my cousin was ever convinced as she still tells people we have CN ancestors. [And just be clear, this was never about blood quantum requirements for tribal membership for me, just research for research sake.)

"Italian, through and through"

The few photographs I has access to for the people from northern Italy had, at first, indecipherable captions. At the time, I just thought my lack of Italian language was the reason for the difficulty. After years of research and a visit in person to the Family History Center in Utah, USA I made a lot headway into the people of the small town of Corio in Piedmont, Italy. Another oddity, the naming conventions were pretty unique for the area, two and three part last names that were not entirely matrilineal nor patrilineal. And when I say unique to the area, I am really saying the township, a tiny little pocket. As we do, I wouldn't circle back to these quirks for years.

It wasn't until I read three different books on linguistics where the authors, who otherwise disagreed on a number of other things, all agreed that pockets of language are left behind in geographically distinct areas (low valleys or mountains, for example) when a new people floods the area through conquest or simply migration. For mountainous areas, it helps to think of the people like tidal waters. (And here I pre-apoligize to linguistic researcher for my simplifications, I am just a layperson) The influx of people only penetrates so far up the mountains. But, if you get enough people, in greater and greater waves over longer periods of time, the "water line" goes farther upwards and leaves multiple marks. In this case, the marks made were traced though language changes over time. Perhaps more fascinatingly, in strata upwards in elevation, language could be impacted multiple times with differing degrees of effects. On the mountain-top, the language can be more unaffected. In the case of valleys, perhaps use the analogy of a fog floating in. It doesn't  sink down into the valley, not completely, unless there is enough of it. Without studying these language changes over time, it *looks* like the holdout language is the invader; that perhaps a whole band of people migrated into the area and set-up shop. But in reality, it's the reverse: the locals where surrounded, and is especially true when you find the pocket areas dotted along and aligning with geological features.

Anyway, hopefully you'll see where I am headed with this and Corio. When I first got the DNA results, I didn't have any of this knowledge under my belt. So I was surprised when my brother, my older cousins, and I had less than 1 percent of Italian.  This hasn't shifted in testing with multiple companies or over time.  When I applied the linguistic concepts from my hobby reading to Corio and really looked, I found they did speak a patois, again, hyper localized but pockets of related Franco-Provençal languages & dialects.  They spoke (and speak today in vanishing numbers) Piedmontese, considered a Valdôtain dialect of the Franco-Provençal/Arpitan language (s). Piedmontese is not a dialect of modern Italian. As you look at evolution of the pockets Franco-Provençal, the genetics makes more sense and well as that "sounds right out of a Roman Empire movie" multipart naming conventions I kept running into in just that small town but not its nearest neighbors. So yes, my ancestors seem to be from Italy as a spot on the modern political boundary map, but it's a tad more complicated than that. And now, I've been able to translate those mystery photo captions. I might have eventually came to the same conclusions without the DNA, but the (perceived) gaping holes in the DNA spurred me to step back a bit and ask different questions.

"Yeap, all Irish from that side."

In this case, it might be a matter of semantics and nuance, but no, not all directly from Ireland.   Looking for a USA<> Ireland connection was getting me nowhere fast. DNA onto the scene, keeps telling me there is a sizable chunk of Scotland in there. Yes, of course, it is my paternal side. As I worked with the data over the years, before the "which side" guesstimate feature came out on Ancestry.com, I'd isolated that the bigger chunk actually came from the maternal side. I stepped back and instead of trying to find where it was, I eliminated where it wasn't. It had to be from my Irish dead-ends. So, re-examining everything had me questioning a secondary source. The town name, which my family historian predecessor had always placed in the United States was actually a town by the same name in Scotland! At the this same I was brushing up/learning for the first time immigration and emigration patterns for the time period. Hop-scotching from Ireland to Scotland then USA was pretty common. They went where the work was. In my scenario like many others, several generations of Irish miners made their home in Scotland before they or their dependents came to mine yet again in the USA. These generations of Irish miners of course married local and folded in that Scottish blood. Now I know those people are from County Down, the town of Banbridge/the civil parish of Seapatrick. I'll admit I'm stuck at a John or James Bright possibly born around 1799. But I am still pleased I made it that far.

So all in all, DNA has helped as one more imperfect tool in the toolbox. I've used it to facilitate my research but never to "prove" or "disprove" any one thing.

Posted by Dedra Wolff at 7:35 AM No comments:

As genealogists, we regularly curse and bemoan the poor penmanship of poll takers and enumerators. But today I want to turn the tables of that trite and tired tradition by instead awarding the Golden Pen 🖊️ 🥇 to  Joseph F. Young, a census taker in Muskegon, Michigan, whose block printing in a 1930 census record is a glory to behold. Our collective hats 🎩 off to you, Joe. 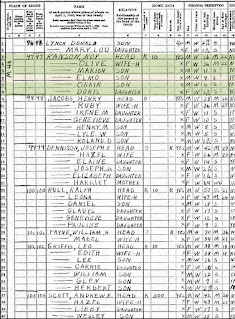 Posted by Dedra Wolff at 2:21 AM No comments:

While I couldn't find their birth records, I found their marriage records in the old country which listed out the parents.

I made an offline tree, with just this tiny branch and have been adding each and every record I grabbed in 2019 at the Family History Center Library in SLC. Some of the records I downloaded are now availed online but they weren't then and still not indexed so the victory is still sweet.

Also, once I've done the extraction, I'm tagging each record as recorded using Mac's native file tagging feature. That way, I can keep them all together and re-sort without losing anything.
Posted by Dedra Wolff at 2:54 PM No comments:

My husband’s family lived in Wüstenzell before 1885. My husband’s great great grandfather, Joseph Engelhardt (Engelhanz?) Spanheimer, immigrated to the United States in 1885 with his sister Rosa and much older sister Martha.

I reached out to some folks on Instagram and a nice person contacted their friend who lives nearby. The house still stands! The Wüstenzell  native took a current picture and shared it with me.  It was easy for them to take the pic as THEY OWN THE HOUSE. Neat coincidence. Pretty exciting!

Posted by Dedra Wolff at 5:26 PM No comments: